I made my first two Harriet Bras at Camp workroom social a last year and about a month after that I went on a bit of a bra making binge. These bras have all been done for a while but I recently got a dress form so I was inspired to actually photograph and blog them! The pattern is the Harriet Bra by Cloth Habit. I had enough fabric left over from my bras I made at camp that I was pretty sure I could get another bra out of it. I ordered two findings kits along with some additional underwires from Bra Makers Supply. 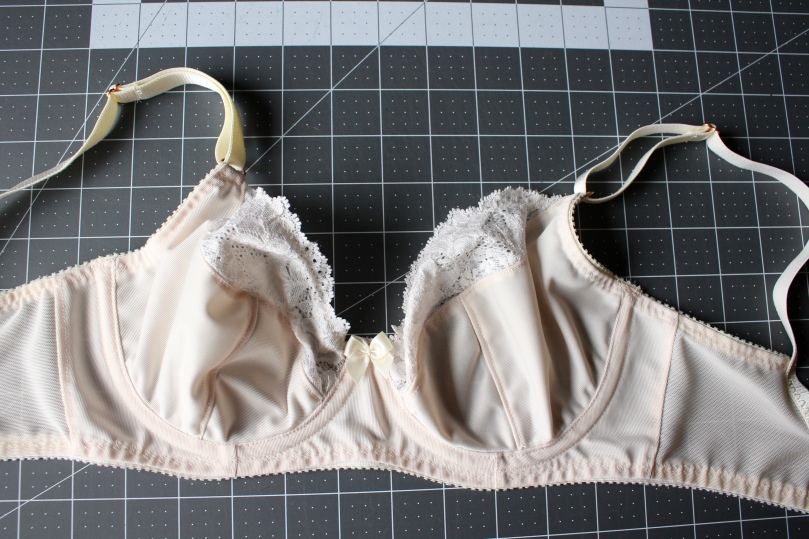 Since my nude colored bra that I made previously was more of a muslin I decided to start with making a nude colored bra first. Cutting out and sewing seemed to go a lot faster when I had access to my own cutting mat/rotary cutter and sewing machine. 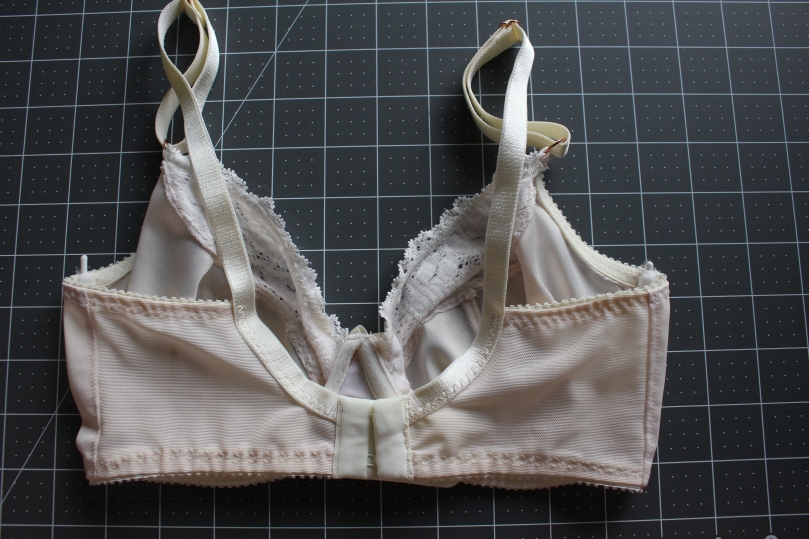 One adjustment that I did made to my pattern was to reduce the amount of depth on my right upper cup. While I was at camp I removed some of the width from the cup but this made it deeper, which I didn’t particularly like. I traced the curve of my left cup on to my right cup so that they are approximately the same. Reducing the depth meant that my seam was going to be shorter so I would have to adjust the lower cup as well. I ended up only taking about 1/8 inch off of the inner cup and everything worked out fine. 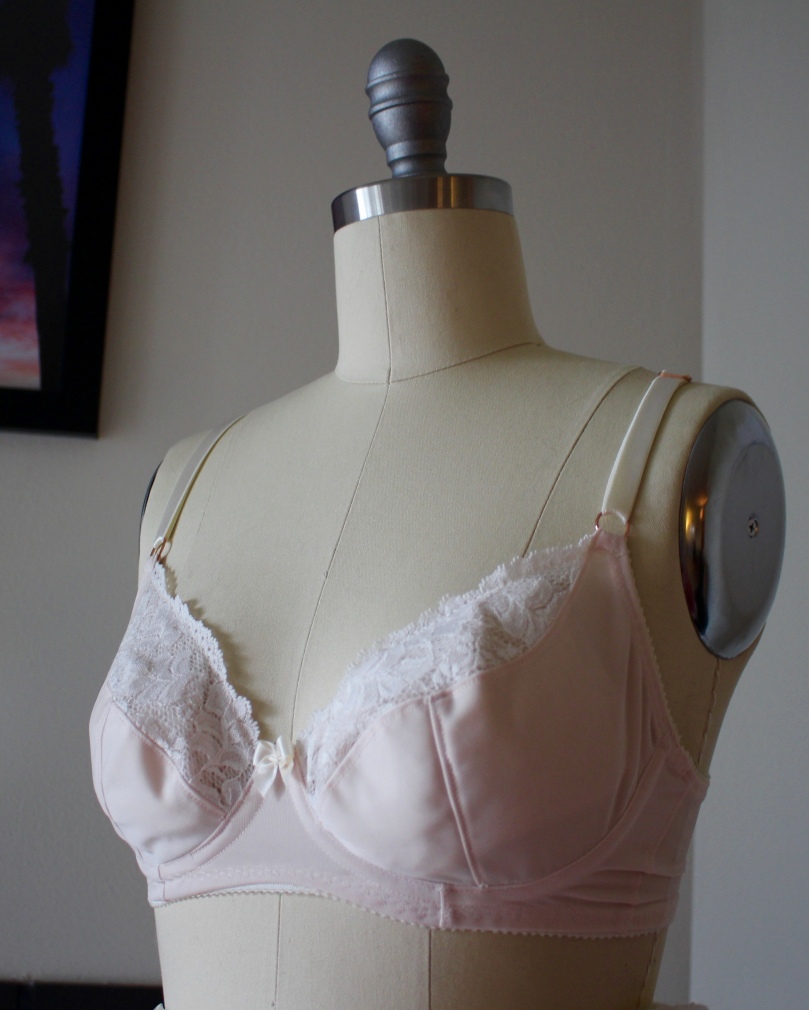 Other than that I just tried to recreate the steps that I had done at camp. I used my muslin as a reference and wrote down the steps I could remember. At some points I had to go back and add some steps that I forgot but otherwise it went fairly smoothly. The only snag I ran in to was near the end when I went to sew my straps on. The strap elastic from the kit was way too short – and then I remembered that the strap elastic that Bra Maker Supply gives is only enough for a certain kind of strap that is partially made of fabric. I ended up ordering more elastic from Tailor Made Shoppe and putting this bra on hold. 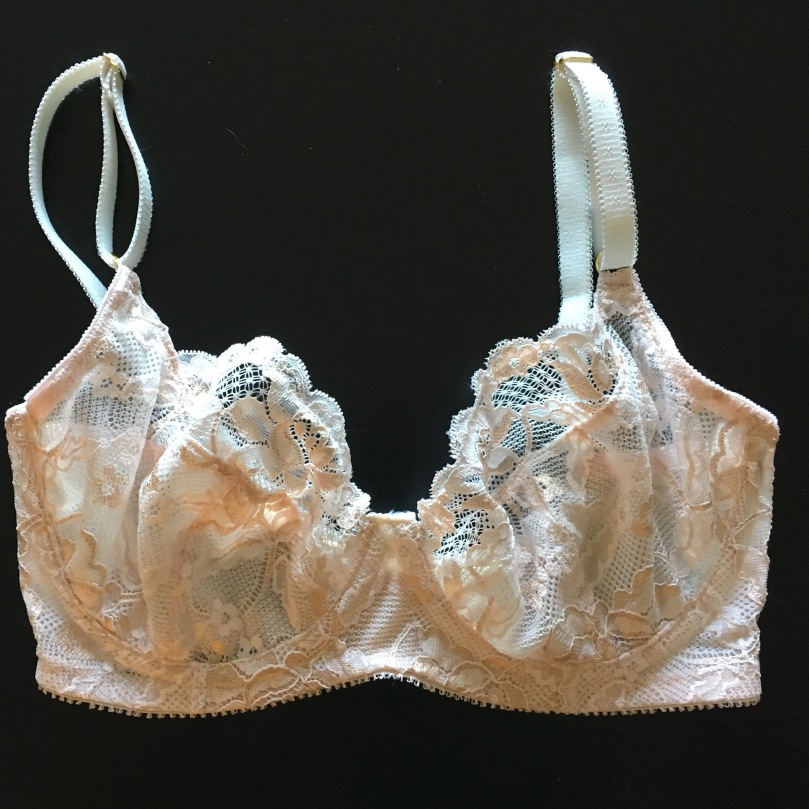 While I was waiting for my strap elastic to come I went ahead and made a second bra. For this one I used a kit from Tailor Made Shoppe that I had ordered on a whim previously. This was the first time following this pattern where I wasn’t using the exact supplies that we had used in class. I was a little nervous about how everything would turn out especially since I had modified the pattern and if the adjustment didn’t work then I would have two bras that would have the same issue. 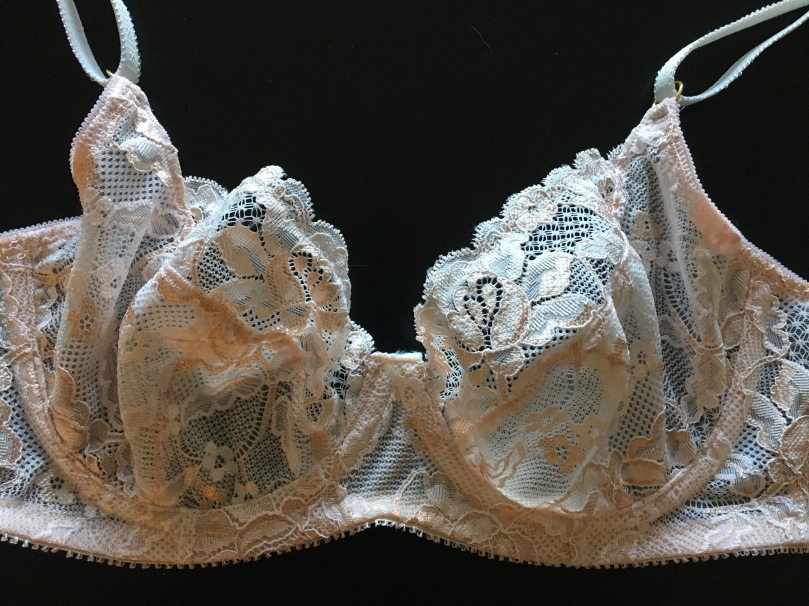 The other issue was that because this lace is much stretchier than the duoplex I would need to line the cups. I cut the upper cup out of lace only but I cut the outer cup, inner cup, bridge, and frame out of both lace and bra lining. I actually cut two lining pieces for the bridge to add stability. 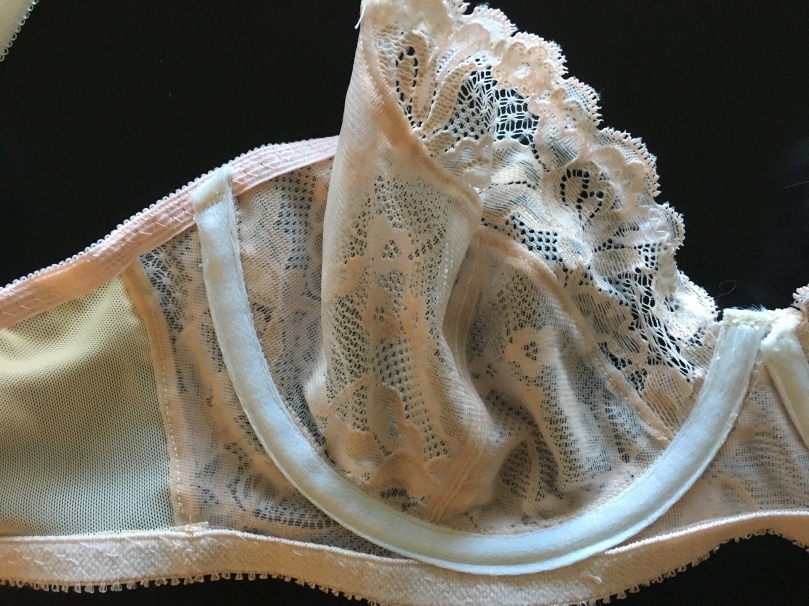 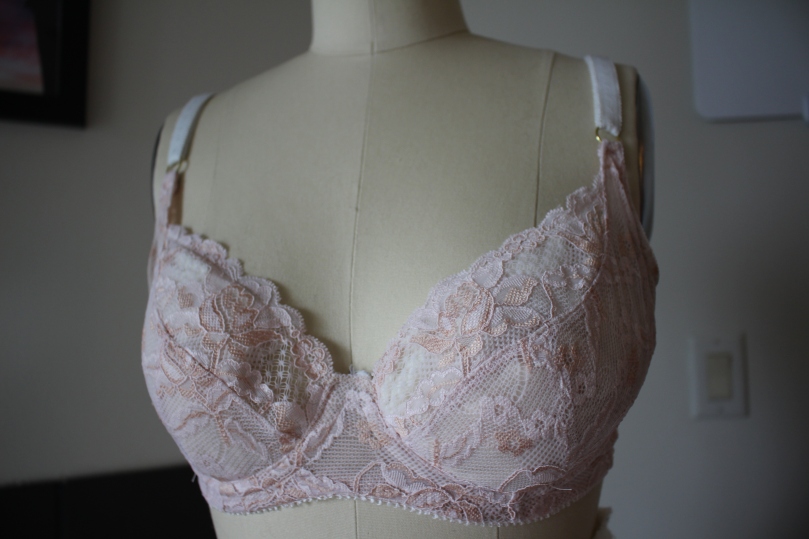 Then, a couple of weeks later I was in a slump after struggling with another project so I really wanted to make a pattern that I had already made and one that was relatively quick – so I decided to make another bra! I made this bra basically in the same way that I made the second bra – only this time I had actual instructions since the Harriet Pattern had been officially released. Turns out – I did the second one right! 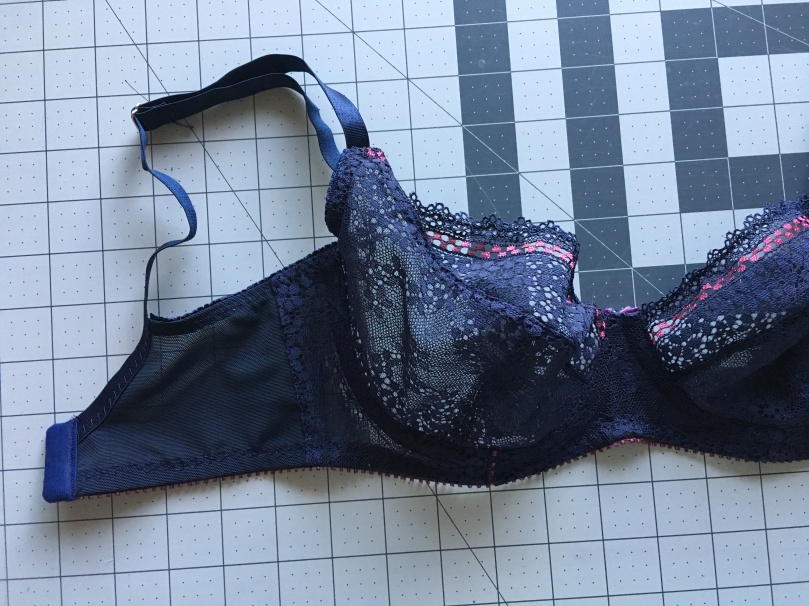 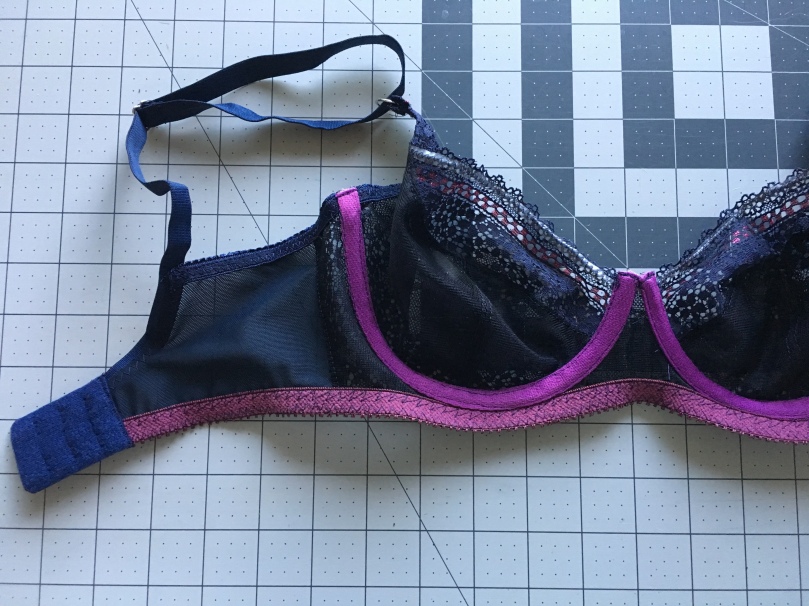 This is another Harriet Bra by Cloth Habit and another kit from Tailor Made Shop. I love the way that navy looks with the magenta – especially the little picots sticking out at the bottom. 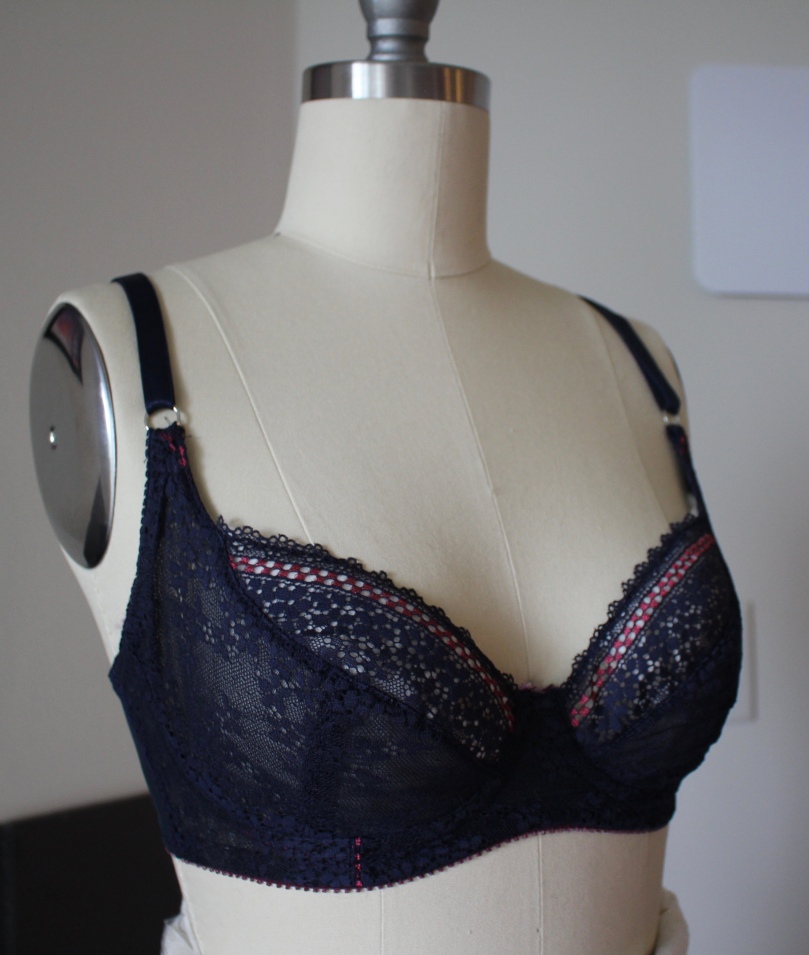