This is actually the second By Hand London Anna Dress that I’ve made but I haven’t taken photos of my first one for a blog post yet. Hopefully I’ll get to that soon but for now here is my midi length version! For my first version I made several muslins and adjustments to the bodice because I wanted a more fitted look. I made a couple more adjustments for this version and if I make another version I may make even more tweaks but overall I’m really happy with how it came out!

I used the April Rhodes Heritage Rayon for this dress and I absolutely loved working with it. I didn’t do any pattern matching on this (which would have been a huge pain with all of the skirt panels) and because the print is so busy you can’t really tell! I just barely squeezed this dress out of 2 yards of fabric! 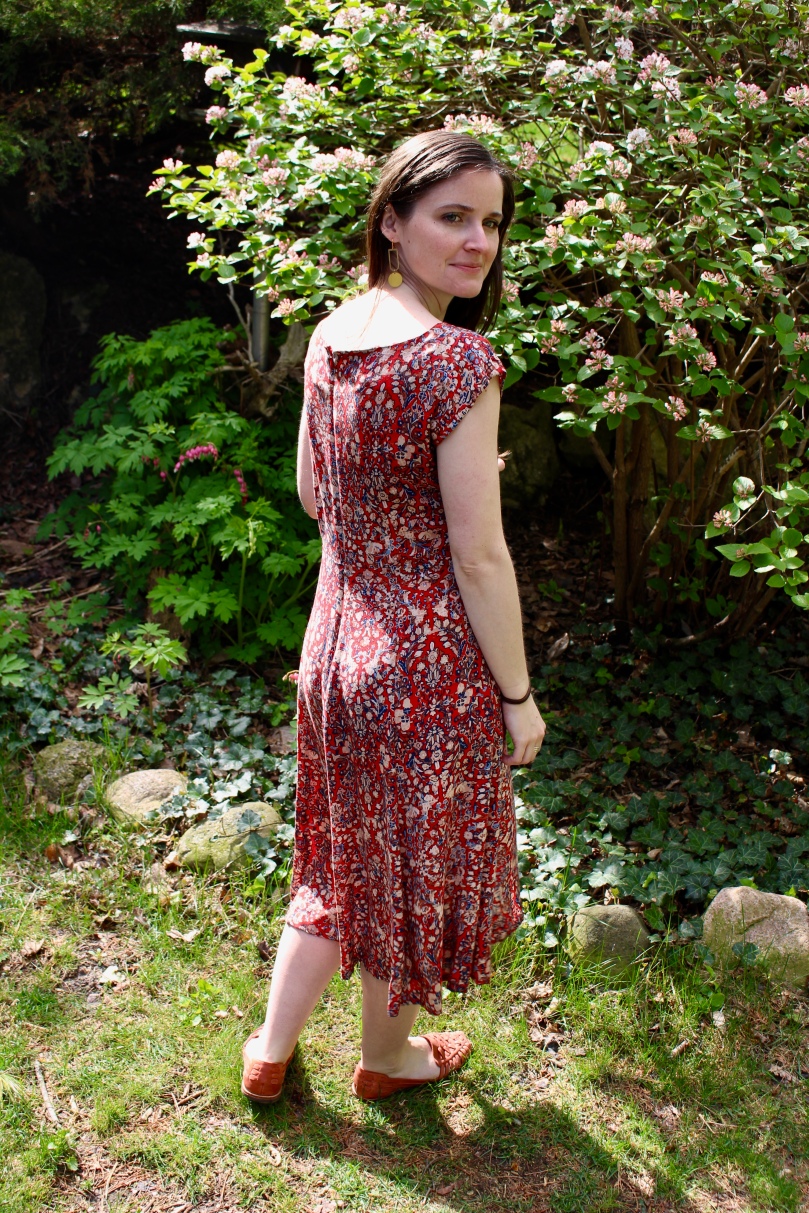 One thing I still need to perfect is the fit in the back neckline. I did take a pretty big amount out of the neckline but I could take a bit more out to get it to lay completely flat.

I love the slit on one side! I don’t know that I’ll make another Anna in the near future but I’ve been thinking about making a skirt. I’ve also used the bodice for another project recently which will be on the blog at some point but maybe not for a couple of months!

I’ve made the Grainline Hadley before in a double gauze but I’ve always loved the v-neck version. I think the neckline looks so good on everyone – so flattering and elegant! I used the Splatter Paint rayon fabric from Workroom Social. I absolutely loved working with this fabric – it feels more substantial than other rayon fabrics that I’ve used and is pretty easy to work with.

I used the same size I had when I made my first version but after I was almost completely done I tried it on and it was way too big! I ended up taking in the side seams/ facing side seams quite a bit and now I’m happy with the fit! Next time though I’ll probably re-measure and probably cut a different size. I may also raise the neckline just slightly because even though it is very elegant its a little low for everyday for me.

I also love the shape of the hem on this shirt. My first version was the higher neckline which has a hook and eye closure at the back. I don’t know why but my hook and eye never stay closed! I think I may need a narrow shoulder adjustment or something to get the top to lay flat against my skin to prevent it from coming open but until I figure that out I’ll just stick with the lower neck version that doesn’t require the hook and eye. 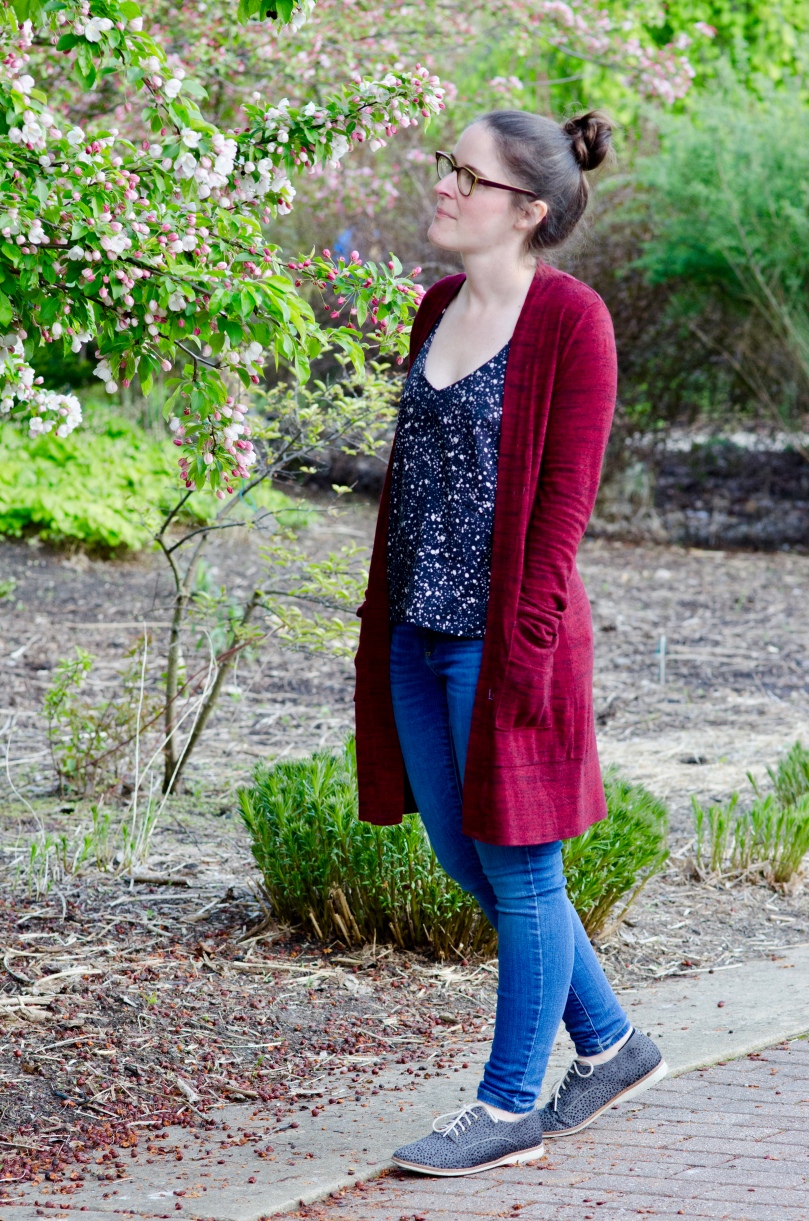 This tank top is also perfect for layering underneath cardigans. I’m wearing it here with my Helen’s closet blackwood cardigan, which I love.

Photos in this post were taken by the lovely Emmanuelle of the Zoubi Zoubisou blog.

I made the Zadie Jumpsuit by Paper Theory Patterns. I had included a wrap jumpsuit in my 2019 make 9 and the Zadie Jumpsuit came out pretty soon after. It seems like everyone has been making it and it looks great on everyone! I am wearing my Zadie with the sandals I made that I posted about last week!

I made view B which is the “sleeveless” version. I made size 6 at the bust and graded out to size 10 at waist/ hips. I shortened bodice 1/2″ and I shortened crotch rise 2″. Next time I might size down in the legs and shorten the bodice more. I also might do a sway back adjustment. I also love all of the shorts versions I’ve seen so I might do that next. 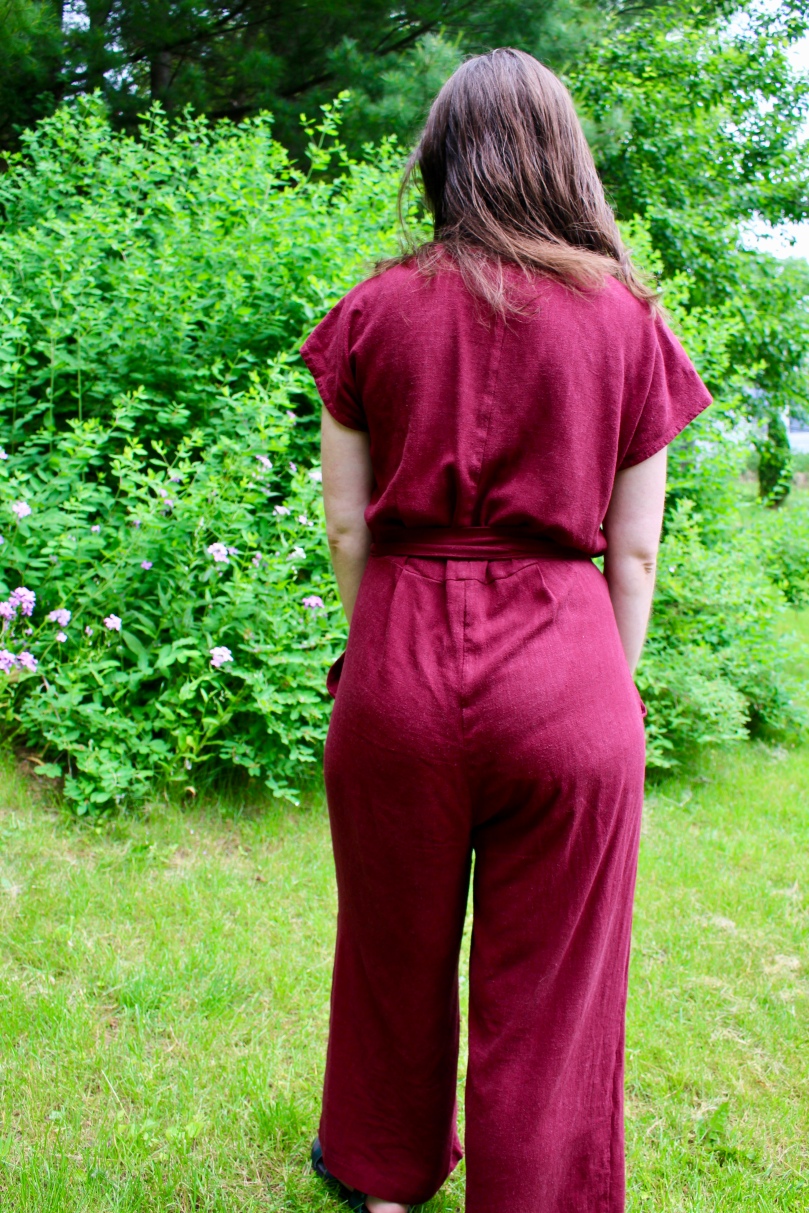 Although I love the pattern there are a couple of things that I’d change for next time. The bias binding method is different from any method I’ve seen. The Coco’s Loft blog has some tips that look like they’d end up with a better result. In the end I did a bias facing instead of a bias binding. I followed the instructions from Blue Prints for Sewing on sewing a bias tape facing as although she has instructions for sewing the binding as well that look excellent. If I make this again I’d create a facing for the neckline instead of using bias tape. It seems like a pretty common adjustment to add a facing. The Joanna Essentials blog has a tutorial for creating the facing pieces so I’ll definitely try that next.

I think because I changed the way I finished the neckline my waist tie ended up folding over in a weird way and came out above the wrap point instead of below. was pretty unhappy with the way it felt until I realize that my ties were in the wrong place and not parallel to the ground. Once I moved them to the right place the ties weren’t pulling in a weird spot and now I’m super happy with the fit. The extra 30 minutes to redo the waist ties was definitely worth it!

I used the mora slub linen viscose blend from Stonemountain and Daughter. The fabric was pretty shifty and grew quite a bit while I was working with it. Next time I’d interface the pocket bag openings and I’d either interface or stay stitch the back crotch seam.

Otherwise its super comfortable and fun to wear! I’m sure I’ll get a ton of wear out of it this summer. 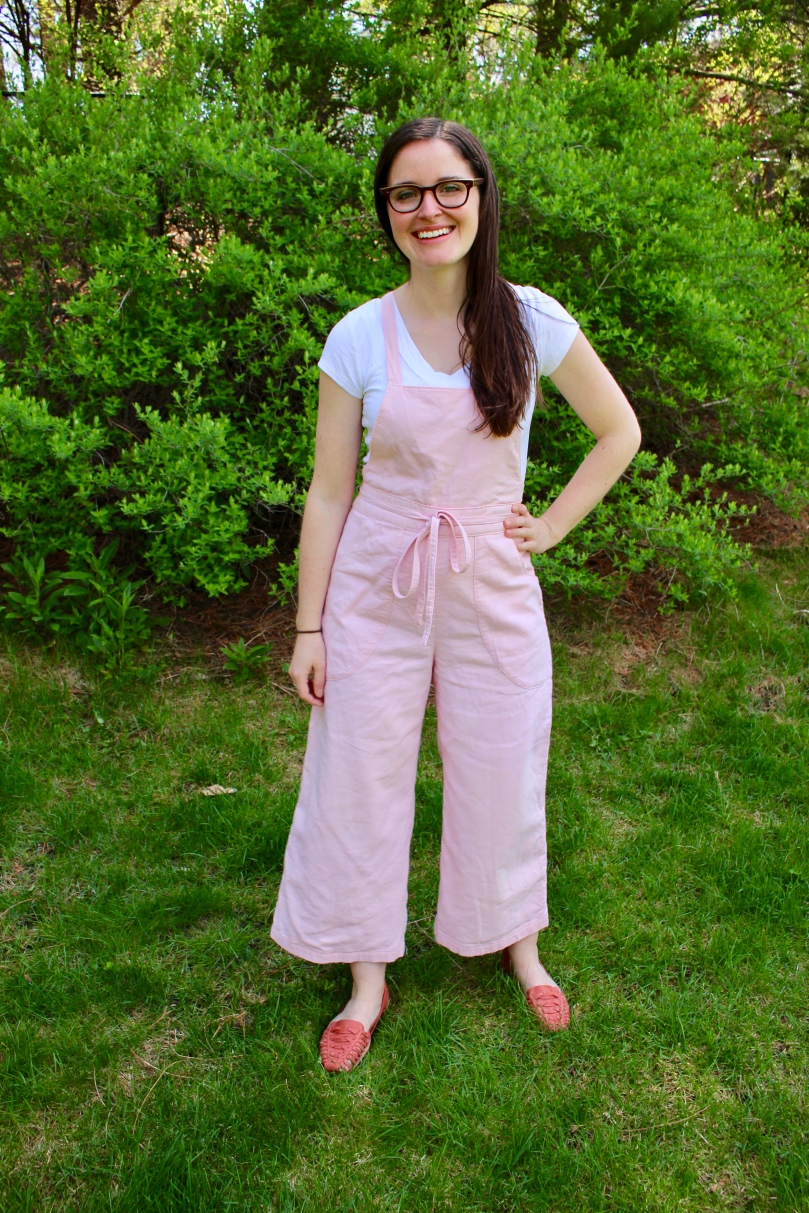 These are the Burnside Bibs by Sew House Seven made out of the Brussels Washer Linen in Petal from Imagine Gnats. At first I wasn’t sure if these were really my style but I kept seeing versions that other people made and they always looked so good so I finally decided to go for it!

This was my first time making a pattern by Sew House Seven and the instructions for these were just so good and sewing them was a thoroughly pleasant experience. I really enjoyed sewing these… except that I made some pretty big mistakes. At one point I was ready to throw these in the trash!

The first mistake I made was to size down too much in the legs. The back of the bibs have extra room and the ties pull in this extra fabric. I wanted to minimize the amount of bunching that happens above the butt so I decided to size down. I mistakenly thought that because the pattern didn’t include finished garment measurements for the hips but did for many other measurements that I would be safe to size down. It was not safe to size down.

The second mistake I made was with fabric choice. While I was committed to making light pink burnside bibs my fabric was a little on the sheer side. I was a little nervous about this at first but I found some examples of other people who made them out of the same fabric and I figured it would be fine. It was not fine. 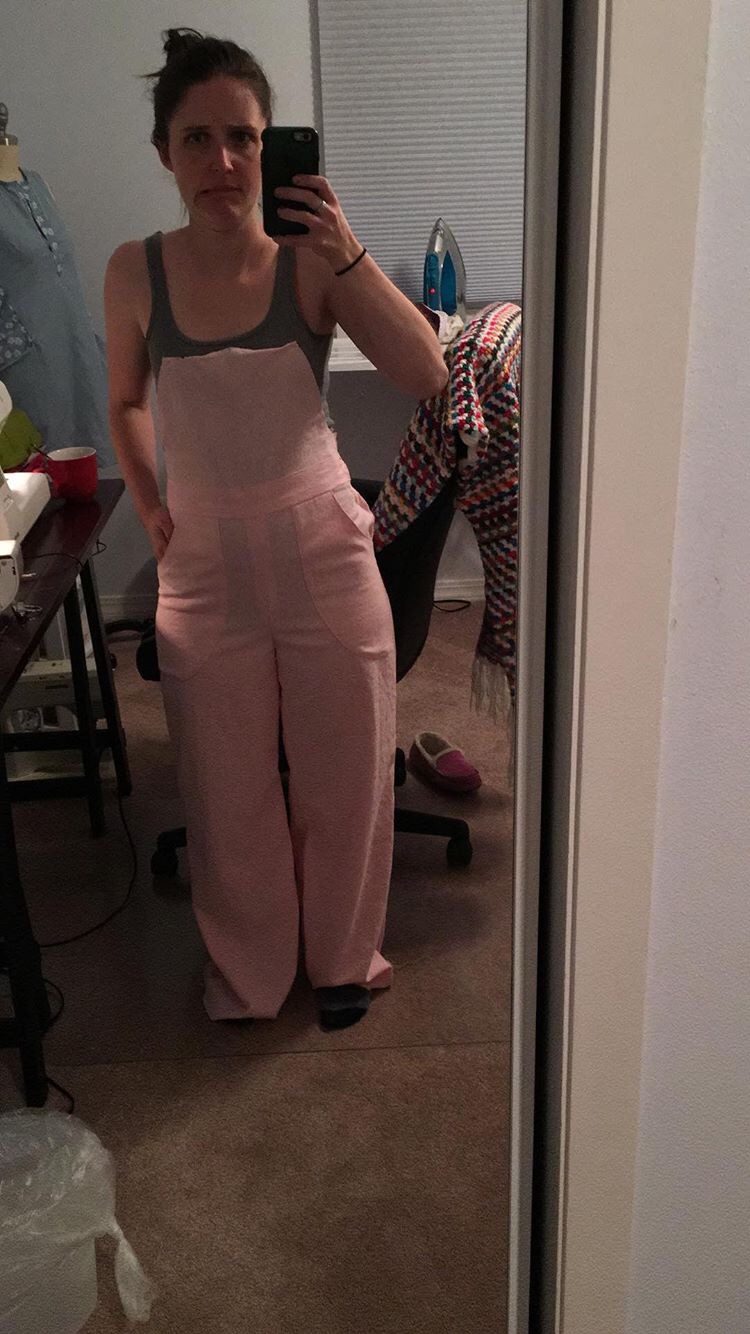 This is a picture of the baste fit for my burnside bibs. They are definitely too tight in the hips but the part that I couldn’t get over was how sheer they were. While you couldn’t really see through them you could really see the seam allowance of the fabric underneath and it just really hated how they looked. I did some research and decided to underline them with cotton batiste. I didn’t want to use a rayon because I didn’t want the underlining to bag inside of the pants. There were a ton of options that contained polyester but I finally found a just cotton one! I then had to entirely take apart the bibs and start over. Technically I left the pockets on but otherwise it was a complete restart. I ended up sewing the legs at a slightly smaller seam allowance which gave me just enough room. Thank goodness they were so fun to sew!

Most projects I work on go relatively smoothly… I feel like this was the first time that I really had to go back and make some major changes to a project. Although it was really frustrating at the time I feel like I learned a lot more making these than I have with many of my other projects recently. I’m not sure how many pairs of overalls I need but I have seen some really cute shorts versions! I’m glad I didn’t end up throwing them in the trash because I really love them now!

I made this Hemlock Tee by Grainline Studios a while back with some black and white jersey striped fabric I got from Girl Charlee. I started by making no changes to the pattern since it is a one size fits all pattern and I wasn’t sure what to expect. After making it and trying it on I ended up shortening the hem of the shirt and the sleeves pretty significantly. Before I hemmed it I was feeling quite overwhelmed by the stripes. I still kinda think they make me look like a prisoner and/or a mime. 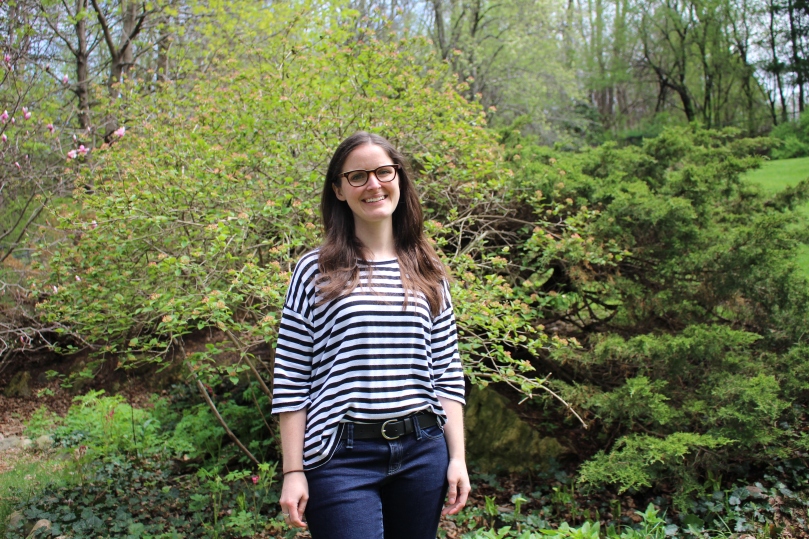 Other than that this was a pretty quick and easy make. I actually made this before I made my striped sweater knit version and my cloud knit version but because it isn’t as exciting I ended up posting about those other two versions first. After making this version I decided that I wanted long sleeves that were a bit slimmer so all of my subsequent versions have a modified sleeve and also are modified for the split hem. I think the split hem adds a bit of visual interest to an otherwise pretty basic pattern. The Hemlock is a great pattern for showcasing a really nice fabric (which this is not). I really love my sweater knit versions but its nice to have this as a lighter weight more casual (prison??) shirt.

Back to top
Girl and Machine
Blog at WordPress.com.
Loading Comments...