I’m so late to posting the top 9 things I want to make in 2019 – its not a good sign that I’ll actually get these things done in 2019. I really loved having my make 9 list last year because I think it really helped me to focus on some things that I had been wanting to make for a while.

In 2019 I want to get out of my comfort zone a little bit. I want to make patterns from companies I’ve never used before. I want to make garments that are a different style than I normally where. And most importantly I want to push myself to try making things that I don’t know how to make.

Burnside Bibs by Sew House Seven – Last year at some point I just became obsessed with the idea of light pink Burnside Bibs. I bought the fabric and the pattern but I have yet to make them. I’m still super excited about them and really want to make them this year. Sew Over It Eve Dress – I made this dress last year for my mom to wear to her high school reunion and it looked amazing on her. I am going to a wedding later this year and I want to make one of these to wear.

Emerald Erin Jordy Bralette – I really enjoy making bras and want to try a different pattern. I got a kit to make one of these and I’m excited to try this pattern. Sandals – This doesn’t really have a pattern but I figure that I have all the supplies I need to make sandals at my Shoe Repair Shop and I think making sandals would teach me a lot. I Can Make Shoes has an e-Course that seems like a good place to start.

Self Drafted Pattern – I’m not really sure what this will look like but I took flat pattern classes and draping classes in college and I want to be able to use those skills. For a long time I’ve been telling myself that I’m not creative enough/ not as creative as the indie pattern designers making patterns but recently I’ve been feeling like part of the reason why I don’t feel creative is because its not something that I’m practicing.

Wrap Jumpsuit – I feel like I’ve been waiting for someone to release a wrap jumpsuit pattern but it hasn’t happened yet. Luckily there are a couple of people out there who have hacked their own and I’m hoping to follow in their footsteps. Thread Snips has a great post on her wrap jumpsuit and how you could hack the free Peppermint Magazine jumpsuit pattern.

A pattern that comes out this year – I still want to be able to be spontaneous in my sewing so I want to leave some room to sew something new as soon as it comes out. I’m excited to see what patterns get released this year!

Finish knitting the sweater from my 2018 make 9 – I really want to finish this year. I made pretty good progress on the body of the sweater last year and I need to start the sleeves. This is the Cascades Pattern by Michelle Wang.

Chalk and Notch Fringe Dress – I love every Fringe dress I see other people make and I think its just time for me to make my own already. 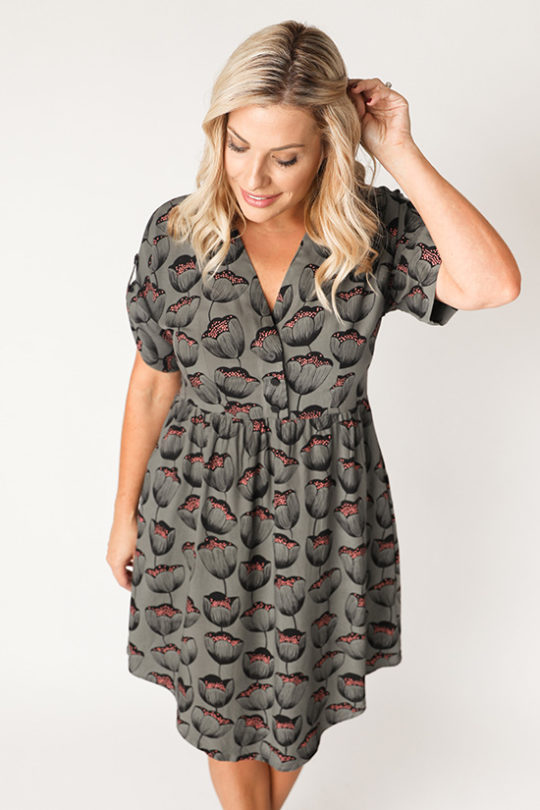 The end of 2017 has been a very busy year for me and I’m honestly not sure how much sewing time I’ll have in 2018 based on my current work schedule. Due to my more limited sewing time planning my makes is more important than ever.

I definitely could use some more jeans in my rotation since that is essentially all I’ve been wearing lately. I tried the high rise version of the Closet Case Patterns Ginger Jeans and while I still wear them very often I find that it looks a bit weird when I tuck in shirts due to my short torso and pear-shape. I’m thinking the mid-rise version in black will be a bit more flattering and very versitile.

I’ve already made two pairs of leggings that still haven’t made it on to the blog. However, I’m definitely in need of more! I used a tutorial on how to draft leggings for my first two pairs so I could just make a couple of adjustments to that pattern and make some more! Alternatively I might use the above Megan Nielsen Virginia Leggings pattern and do a comparison between my self drafted version and the pattern created by a professional!

At this point I’ve made several Harriet Bras but I still haven’t made the Watson Bra. It is high on my list for 2018 since I’d love to have some more soft bras!

After I was totally defeated by my first pair of underwear in 2017 I think I’ll be recovered enough at some point in 2018 to give it another go. I’m honestly not sure which pattern I’ll end up using since my first try was such a disappointment. I could try the Watson Bikini since I already have that pattern but I may also try a hipster pattern since maybe the bikini style isn’t good for me based on my first experience? The pattern above is the Evie La Luve Bella Panties which could be a good option.

I had been looking for fabric for the Victory Patterns Hannah dress for a long time and I finally found some amazing fabric over Thanksgiving break when I made a stop by Stonemountain and Daughter. I absolutely love this version by Closet Case Files and I’m going to do something similar with a floral fabric with the color blocking.

I started knitting a sweater a while ago but it ended up being a huge disappointment and I still haven’t finished it. I am thinking I might just frog that one and move on with my life. For my next sweater I think I’m going to use the Cascades Pattern by Michelle Wang. My parents got some wool spun in to yarn for me last year for Christmas and I’m really excited to use it so I definitely want to start towards a sweater this year.

I love my Kalle Shirt Dress but I haven’t been wearing it since it has been so cold. I’m planning on making a tunic length version in chambray and maybe adding sleeves for extra warmth if I have enough fabric. I think this will get a ton of wear this winter so I’m hoping to get this one done pretty soon!

This one doesn’t seem that exciting since I’ve already made two of them but while I was in New York City recently I got a large scale floral print to make in to another Grainline Studio Alder Shirtdress and I’m super excited about it. My other two alders get a lot of wear so I’m really excited to make a bolder version in 2018!

Here’s another view of my @grainlinestudio #archerbuttonup which I lengthened to be a dress and modified the pockets. I used tencel twill from @blackbirdfabrics and was originally planning on making a shirt but when I realized I had enough for a dress I just had to try it. I still want a shirt version though but maybe I’ll just make another one 🤷‍♀️ . . . . #bftenceltwill #madisonsews #wisconsinsews #handmadewardrobe #archerbuttonupdress
Did you know that I have a blog? I just posted this @grainlinestudio #archershirt hacked to dress length with some cute pocket details and it was my 100th post!!! My 2nd ever blog post was also an Archer Shirt ❤️ I also used the @closetcase.patterns #amyjumpsuit belt pattern to make an optional belt and belting gives the dress a totally different feel! I love the modern feel of the unbelted version but I also like the more casual look of it belted so I’ll probably wear it both ways! . . . . . #madisonsews #wisconsinsews #handmadewardrobe #grainlinestudio #blackbirdfabrics #tenceltwill #bftenceltwill
I’m really happy with how many things on my 2019 make 9 I did! The only thing I didn’t end up doing was drafting a pattern. I still want to do it but it was always a stretch goal. I like coming up with a make 9 to keep me focused through the year but as of right now I have nothing on my make 9 list! Although, when I went back to find this apparently last year I didn’t come up with my make 9 until February 11th so I guess I still have time. I have a ton of fabric that I love so I think I’ll use that to help me focus my make 9 for this year.
I’m so excited to finally be done with this sweater! This is the Cascades pattern by Michele Wang that I’ve been working on this for almost two years 😳 but I’ve had a lot of other stuff going on and also working on a sweater for two years is the epitome of slow fashion! My parents actually had this yarn spun for me from alpaca and sheep wool from their farm and this is the natural color of that mixture! I’m very proud of this! I’m also in search of my next knitting project. I definitely want to make another sweater but I’m thinking some hats or socks next. . . . . #knittersofinstagram #knitting #cascadessweater